Jacob Collins is a leading figure in the contemporary revival of classical painting. He earned a BA in history from Columbia College, attended the New York Studio School, the New York Academy of Art, and the Art Students League. As a student, Collins also copied extensively in museums in America and Europe. His work has been widely exhibited in North America and Europe and is included in several American museums. Collins is the founder of the Water Street Atelier, The Grand Central Academy of Art, and the Hudson River Fellowship. mas 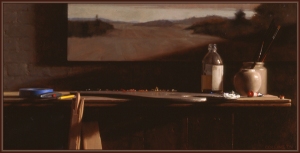 ¿Como se hizo? In the Depths